Tesla plans to release a Full Self-Driving subscription option in 2021. 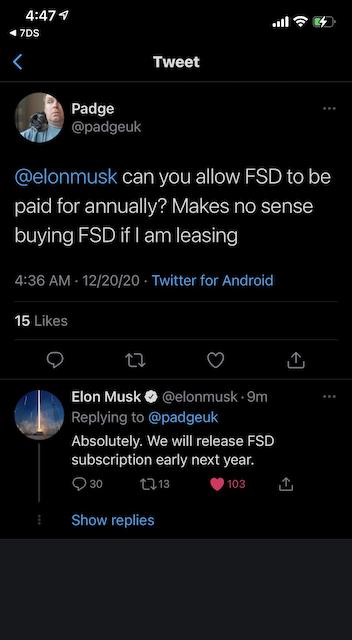 CEO Elon Musk confirmed on Twitter, following breaking news about approaching Apple regarding an acquisition of Tesla when Model 3 begun production, that a Full Self-Driving subscription is still in the pipeline, and will be released “early next year.”

It should be noted that Tesla has emphasized multiple times that a subscription option would cost more than purchasing the package outright, which is available currently at $10,000.

Full Self-Driving is currently in beta for those in the Early Access program, with development progressing at a steady pace. Autonomous driving on city streets is becoming increasingly possible with limited interventions.

The launch of a subscription indicates that Tesla is planning on rolling out more Full Self-Driving features to consumers sooner rather than later.

We should expect that by the time that Tesla is ready to launch a Full Self-Driving subscription a majority of the features that are in the beta release will be available to all supported vehicles, with the main obstacle being regulatory intervention.

Still, “Elon time” is typically an overly-confident construct: a Tweet about a subscription option that will be released in early 2021 may mean that we won’t see it until later in the year.

This serves as further confirmation that a subscription is forthcoming, which may be the best option for some consumers, and that purchasing the package outright isn’t necessary to eventually be able to take advantage of Tesla’s upcoming Full Self-Driving Capability.