Tesla has added a leasing option to Model Y. 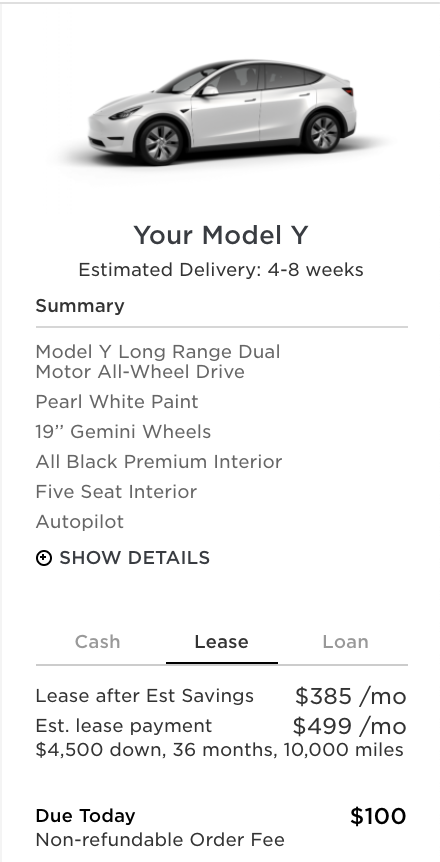 Leasing starts at $499/month before incentives for the base Long Range Dual Motor All-Wheel Drive configuration, with a suggested down payment of $4,500. An estimated total of $5,700 is due at signing, which includes a $695 acquisition fee as well as the first month’s payment.

The lease payment jumps to $679/month for a Performance Model Y, with roughly the same amount due at singing. Adding Full-Self Driving Capability increases the payment by $113; however, it may not be worth the addition on a lease especially seeing as many of the features aren’t yet available.

Just as with Model 3, there will be no buyout option for Model Y — meaning that lessees can’t choose to purchase the vehicle at the end of the lease as they can with other automotive brands. Tesla plans to use the vehicles on its upcoming autonomous taxi network, which according to Elon’s timeline should be ready within the three years that it takes for Model Y to come off of its initial leases.

Tesla’s upcoming Long Range Single Motor (Rear Wheel Drive) configuration for Model Y is expected to make leasing more affordable, and should include a MSRP of around $45,000 which would lease for around $449/month.

Customers can order Model Y and setup a lease agreement directly on tesla.com.

At the end of the day leasing is another form of financing, and we’re glad to see Tesla adding more options to make Model Y slightly more affordable. This is $200/month cheaper than financing the vehicle directly over a term of 72 months with the same down payment amount.

Although we should add that a $4,500 down payment isn’t necessarily advisable to all consumers because if the vehicle is totaled it can be difficult to recoup upfront costs. Assuming a down payment of $0, the monthly payment is about $134 more expensive at $633/month for the same base Long Range Dual Motor configuration.

Not necessarily a bad deal compared to the competition in the crossover segment, especially considering some states offer rebates that can further reduce the cost of leasing.

–
Only Used Tesla: The BEST Place to Sell a Tesla for TOP Dollar.
contact@onlyusedtesla.com Made in USA.